Super TV is a show that twists all of variety show formats in the world and presents them in Super Junior’s own way. This format is called Super Junior Crazy Idol Variety. The show's format will include quiz show, talk show, game show, eating show, reality, documentary, sports, film, and comedy. Super TV stars members Leeteuk, Heechul, Yesung, Shindong, Eunhyuk, and Donghae, with slogan that saying 'There are some who are less crazy, but there’s no one that’s not crazy' 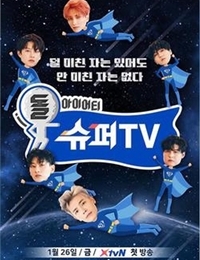