Family Outing was a South Korean comedy-variety show; a part of SBS's Good Sunday lineup. It first aired on June 15, 2008, and was one of the top rated programs on Sunday Korean television. The format of the show called for the "Family" to travel to different parts of South Korea, taking care of the house of an elderly family, who go on a vacation. The "Family" then accomplishes the tasks left for them by the homeowners. 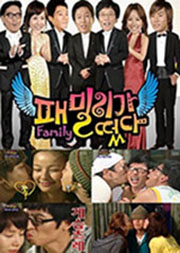