BIGBANG's first world tour 'Alive' comes to a stunning conclusion with a special show in Seoul. The group held 48 shows in total from 2012 to 2013, visiting all over Asia, North America, South America, and Europe. In this spectacular show directed by Laurieann Gibson (who's choreographed Michael Jackson, Lady Gaga, and Beyonce), the group performs their hits from their album 'ALIVE' including 'Fantastic Baby,' 'Monster,' 'Bad Boy,' and their solo singles such as 'Crayon' with G-Dragon and 'Wedding Dress' with Taeyang. With their high-flying effects and stunning choreography, BIGBANG also won an MNet Asian Music Award for their powerful performance in this world tour. Available only in North America. 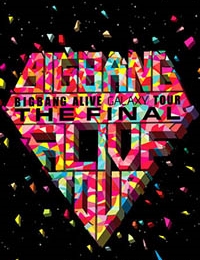